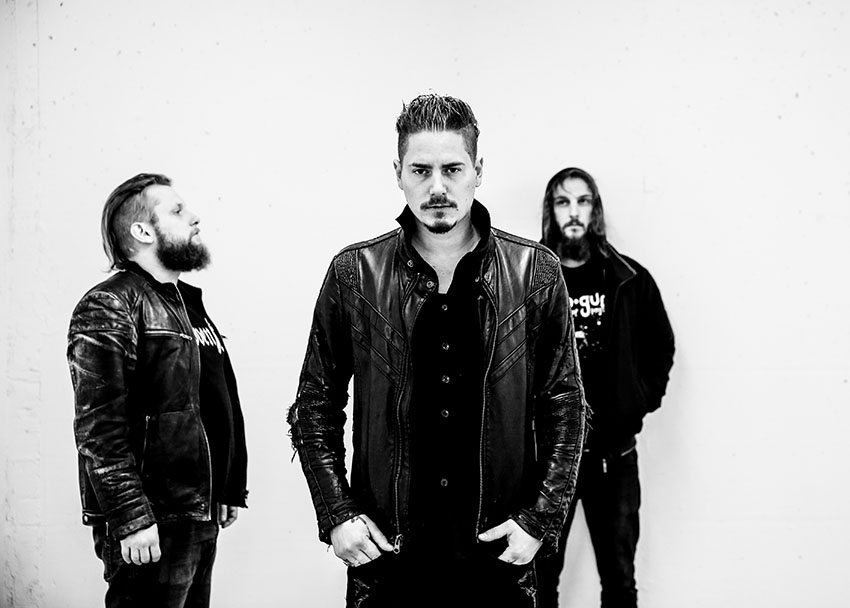 It‘s what young colts dream of: being on the road, playing shows, living a musicians dream… sadly few actually have that opportunity. Sons of Morpheus do, but they know: It brings sweaty shows and fans lurking for autographs on the bright side. However dragging gear into a bus at 4am, DIY-ethos, broken or broken-into cars and corrupt custom-officers on the other side. It‘s both ups and downs but for Sons of Morpheus (maybe just for the sake of it?) a life worth living. But back to square one: Before Sons of Morpheus were able to tour across Europe (f.e. with Karma to Burn, Kamchatka, Coven) and playing shows in 17 countries including USA, a simple feeling gave birth to everything: The need to crank up an amplifier and doing some good-shit rock music. Fuck the world!

And that‘s exactly what made singer/guitarist Manuel Bissig start conquering stages in Switzerland by the name of «Rozbub» (Swiss-German for «brat»). Everything followed the call, it was loud, nasty and raw - and immediately everyone could see, hear and feel: This «brat» knows exactly what he‘s doing. The volume of his amplifier related perfectly to the amount of skills he put in his playing: a lot. Maybe it was that basic motivation that made him choose the classic form of a power-trio to form his band. To get as much freedom as possible by concentrating all the energy in a most effective way. Raw riffs giving space to sprawling improvisation and interplay - paying respect to the icons of the golden era like The Jimi Hendrix Experience and Cream, as well as Nirvana in the 90‘s and present bands like Kadavar. Feedback dropped in quickly, the fanbase grew and media dig‘d it too. No surprise that 2013 released debut «S‘esch ziit» climbed the Charts right away.

It would have been very comfy and relaxed to let the ball roll like that. But the comfort-zone is no place to be, and as the band’s sound began to show its distillate Sons of Morpheus was formed out of three equal members representing a sworn unity. In no time the sons played shows in the rock-republic of California and recorded for two weeks in Tucson AZ with Producer Jim Waters (Jon Spencer Blues Explosion, Sonic Youth). As a result a debut-album simply called «Sons of Morpheus» was about to be released. It turned out to be surprisingly heavy but nicely interconnected with tangible songs and joyful jams taking your mind away. That album lead the band out on many many miles in Europe and so 2015 was mostly «gigs» for SOM, both in punchy basement-clubs and big festival sceneries.
The band‘s call for the following year 2016 was clear: To go back to rehearsal, write new material and get it recorded… What they actually did too, but there was more: Sons of Morpheus are known to grab the bull by the horns and not sit idle as they had the chance to tour in US stoner-giants Karma to Burn‘s nightliner, doing a six-week tour by slamming 37 shows all over Europe. And by far that wasn‘t the only «bus-call» that year: Spain and Germany have been toured just weeks after.

In 2017 Sons of Morpheus appear on «Nemesis» even more on the spot, their sound is gloomier yet explosive. How come? For sure producer David Weber deserves a line or two here. Back in the days, he used to capture and helped to develop the dark and threatening sound of Switzerland‘s most exciting and profound export: The Young Gods. It seems that somehow some of it got stuck in that Neve-desk… Or maybe it’s just the world we live in that makes it sound like that.

No rest for the wicked: In January 2018 the band locks itself into a secluded cottage and records 8 tracks completely on their own. Three of those are released the same year on Label «Sixteentimes Music»’s «The Fuzz Charger Split LP» in combo with berlin based heavypsychos «Samavayo». Sixteentimes’ labelboss did not only put out a record but slammed the two powertrios into a van and made them tour the EU following the release. The rest of the recording sessions material is to be put out in 2019 under the name «The Wooden House Session». No way to miss: Sons of Morpheus’ riff-swampiness has never sounded edgier driven by immediacy only heard by bands that carved their name in stone for eternity. By masters of pigeonholding more and more located in todays lively stoner/psych-scene, it is to mention that the group’s playing and swaying into busy outerspace may be complete overkill to state-of-the-art stoner-potheads… for the good!

Nevermind, it’s anyway never been the groups idiom to dine on the main square rather than to bash heads with modern day’s brutality into the 70‘s musical exuberance and liberalism, always driven by - boy, and you‘ll hear that - the simple and basic instinct that brings three kids down to a basement to form a band: The all urgent need to crank up an amplifier, break a skin or two and make the building shake. And by doing so, for a few precious minutes, change the fucking world with it.