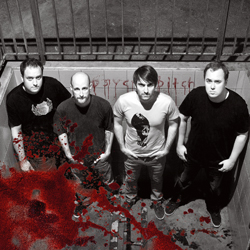 The Swiss music scene was bored. That’s why Psychobitch had to come into existence in 2009 as a side project formed by the members of the well-known Bands from Basel Zatokrev, Toxic Guineapigs and Cancer. The idea was to create sexy and brute Metal-Trash-Punk – not to mince matters, without flourish, without compromises. The rest of the story can be told quite quickly: the first band practice,the first completed song. They hit it off. Rapidly they created enough songs to get out on the stage and perform the first sweaty concerts. In fall 2011 Psychobitch is going to release their first studio album, which will be published by the label „Czar of Crickets“. Patrick Hagmann is the producer, he is the former lead guitarist of the late metal band “Fear My Toughts”. According to the bands philosophy the production turned out to be short, raw and dirty. This is a result of the songs having been recorded live, so that they didn’t lose their natural groove by computed additions. Distinctive raw vocals, driving riffs and snarehits right to the eardrum shape the character of the songs. Melody switches with scream, rhythm with guitar strumming – and all that in a concentrated and tightly arranged style. A pleasure for every well-disposed enthusiast.
www.myspace.com/psychobitchband
Releases:
Psychobitch