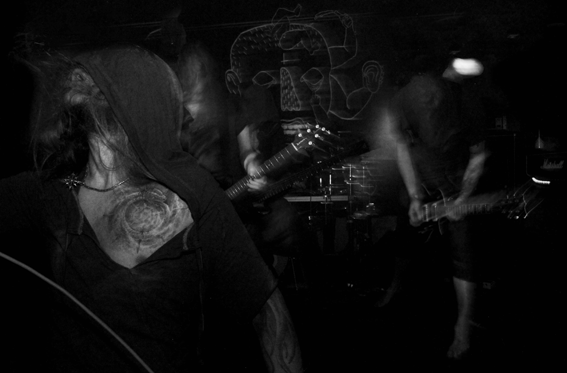 ColdCell was founded in 2012 out of the ashes of Atritas, one of Basels oldest Black Metal bands who decided to do a complete restart for musical and conceptional reasons. ColdCell’s sound is still based in Black Metal, but although the terminus Swiss-German-Icelandic Extreme Rock’n’Roll has an ironic touch, it is seriously meant in a way to state that there are no musical borders for ColdCell; no matter if it’s Doom, psychedelic-psychotic Synthie-passages, industrial elements or simple rock patterns: As long as it fits to the musical and conceptional vision, everything (extreme) is allowed. Like the music, also the lyrics differ from typical Black Metal topics. ColdCell is the musical manifest of the modern individual’s prison: The modern news world, the globalized, digital society, a virtual designed image. Humanity as a sick species without consciousness, arbitrarily exchanging its gods, its ethics, its principles, isolated within the anonymous masses. The only benchmark is mammon, the individual is lost within stimulus satiation and shallow-brained social networks. The cell in the band’s name has a double meaning: First as a constructed, bred human cell, produced and used for industrial purposes: human being as a single wheel within the system. And second, the cell as a metaphor for the isolation arrest of the individual, lost within the masses, finding no connections. Needless to say, there is a lot of irony, sarcasm, cynicism and scorn in every aspect of ColdCell’s work.
After “Generation Abomination” (2013, Gravity Entertainment) and “Lowlife” (2015, Avantgarde Music), the third opus – yet untitled – was again recorded, mixed and mastered by Victor Bullok at Woodshed Studio (Dark Fortress, Triptykon, Farsot, Schammasch a.o.) and is going to be released by Czar of Bullets in spring 2017. The album has a wider musical range than ever before but is still absolutely focused on ColdCell’s particular atmosphere and vibe.
www.coldcell.ch
www.facebook.com/coldcellofficial
https://cold-cell.bandcamp.com
Discography:
2013 - Generation Abomination (Gravity Entertainment)
2015 - Lowlife (Avantgarde Music)